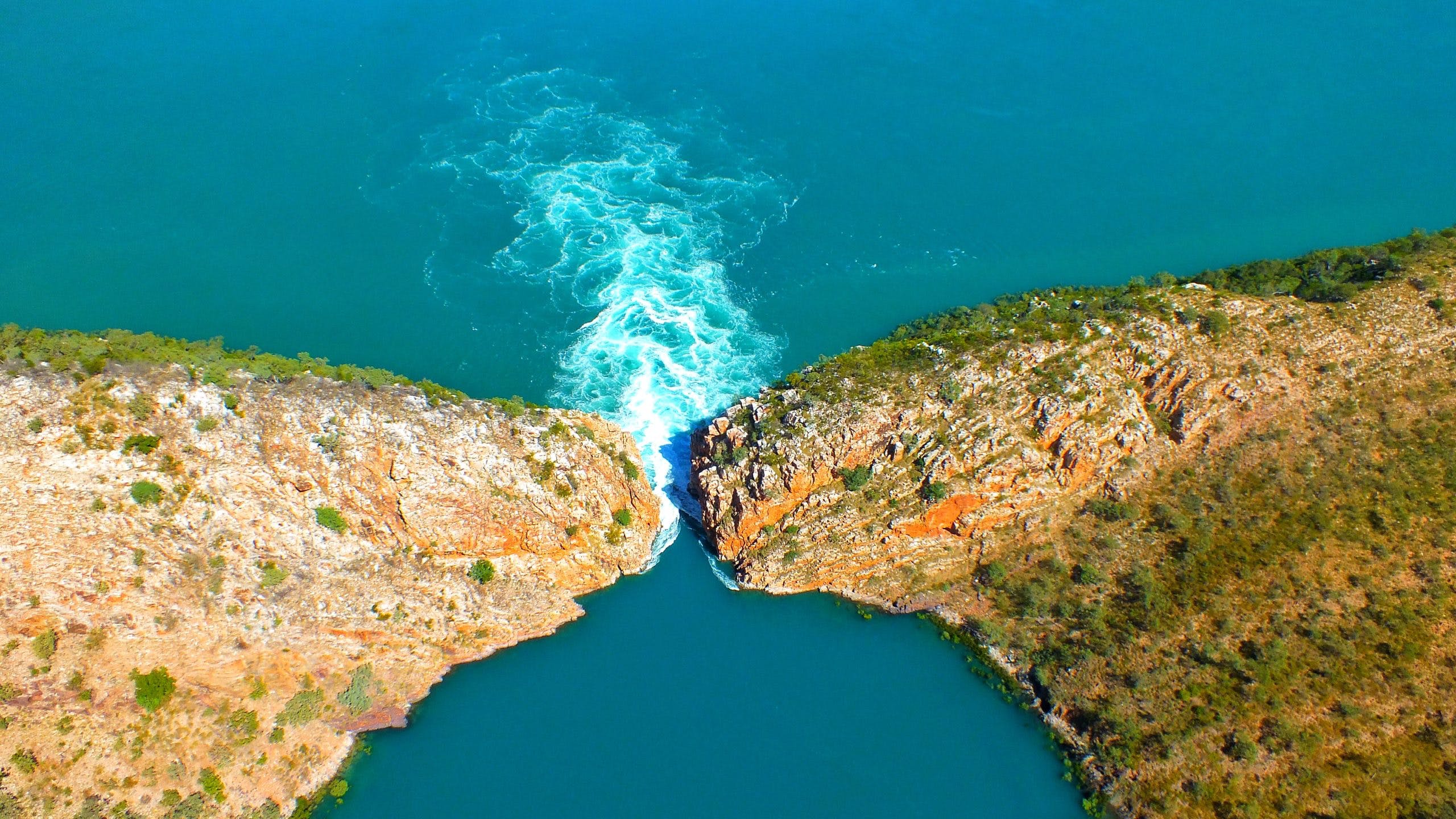 Words and Images by Mark McGirr via Caravan & Camping Australia

Thanks Mark for sharing your experiences at an Australian icon, The Horizontal Falls, just north of Broome and Derby on the Kimberley Coast in Western Australia.

A few people have been posting about the Horizontal Waterfall Tours, here is our experience when we did the 24 hour trip back in June 2018. We had a group of 10 vehicles in our trip across the Kimberley – some did the overnight trip while others joined us on the 24 hour trip.

It’s a trip you have to do once or maybe twice, it’s an incredible trip and well worth the money.

We were all booked in at the Kimberley Entrance Caravan Park. The excitement was building as most of the group had pre-booked for our tours to the Horizontal Waterfalls. This tour is what we had been waiting for. We had booked these tours well in advance through Ian at the caravan park. The benefit was that we did not have to pay until 30 days prior to the trip.

There were two tours the group took. One being the 24 hour overnight trip. This trip could only take a total of six couples and we took the spot for five couples. The other trip members took an overnight trip that left in the afternoon while we left in the morning.

We were all ready to hit the Falls and us pet owners had booked our pets into a kennel for the night. We arrived at the airport ready for the seaplane. Penny and I decided to go all out and take a private helicopter to the Falls. I can tell you taking off in a helicopter with no doors and flying at 100 km an hour 1000 foot above the ground is a little scary, but the views are great especially with commentary by the pilot. The trip only took 45 minutes.

The helicopter pilot flew over the Falls and headed to the main base and with a handful of people taking photos of us as we landed on the roof of the large house boat, it made us feel like royalty. The other parties landed in their seaplane at the same time as us.

We were all grouped together and met our guide who would look after us for the next 24 hours. The first part of the trip is watching him feed the tawny sharks. They were a good size and even though not interested in eating humans there was a cage between us and them.

Most of the group jumped in the water behind the cage to watch the sharks close up. The sharks suck their food in with a loud noise and the guide advised that even though you cannot see their teeth they are angled back at 45 degrees and if your hand gets sucked in while they eat, it could be messy trying to get it out. One staff member did lose a finger once!

After the shark feeding we all jumped aboard our luxury fishing boat to be transferred to the group’s private houseboat, located in a quiet spot away from the main houseboat. On arriving at the house boat we were taken upstairs, the house boat has three levels, to the roof deck to enjoy some drinks, a light meal and take in the scenery. The middle deck has its own bar with ice and mixers, we all bought our favourite alcoholic drinks. We were then escorted to our own private ensuite bedroom with nice big windows. There was a lounge and outside deck on the same level.

After refreshing up we headed off on our four hour fishing trip. The die-hard fishing enthusiasts were all keen to catch the biggest fish and again try and out do each other. Yes, I know we cannot help it…We had a total of 4 rods on one side of the boat due to the strong currents which is created thanks to the 9 metre tides. We all had a go on the rods and with no luck happening – we just enjoyed the scenery and the colours.

Suddenly, just before we were about to head back Greg, yes Greg, got a big bite on the rod! Excitement filled the air as Greg fought this monster. The fish had Greg moving up and down the boat as he tried to bring this monster to the surface. With enthusiastic support from everyone, he brought the fish to the surface. It was a shark, not too big, but it was a fish. After releasing the shark, we headed back to our private palace on the water for lunch.

After a hearty lunch our next tour was a 10 min flight by helicopter. A staff member walked up to the top deck where we were and radioed asking for a helicopter. Within 2 min a helicopter appeared and landed on the roof of the houseboat near the top bar. It was new $2 million one. Talk about feeling like James Bond. The chopper would take 4 people at a time and fly around the area and you see places we missed flying in.

After the flight we then boarded our own jet boat to tackle the falls as the tide is dropping. With 3 x 150 hp motors on the back these boats can move. There are two Falls that you get to see. The first one is wide, while the second one is very narrow. We arrived at the first Falls and after driving around the entrance we headed through. What a buzz.

The second Falls were waiting and we headed towards it at speed, then slowed down. The amount of water coming through the gap was incredible, the difference in water level can get up to four metres. We all thought: ‘no way could we get through’ but the skipper had all motors firing as we flew towards the Falls. Most of the women were screaming, as were some of the men, and at the last minute he turned the boat away from the Falls to a quiet part in the bay.

He explained that the safety for everyone is paramount, and no one ever goes through when the falls are like that – but they enjoy hearing everyone scream.

We headed back through the first Falls and stopped while we were given a commentary on the history of the area. With the incredible amount of water coming through these falls they create very large whirlpools, some 20 foot across. These whirlpools would suck anything down, in fact the skipper looked behind the boat on one occasion and a large whirlpool started forming and was dragging the boat backwards, it took him only seconds to fire up the motors and move away.

After enjoying the Falls we headed back for pre dinner drinks and after a fabulous dinner we prepared ourselves for a big night with the drinks. We freshened up, got into our party animal gear and prepared for a night of fun, lies and laughter.

Our skipper said the time to beat partying into the night is 11.00pm. We said no problem, we are professionals at this and we would only be warming up by then. The three staff had their own rooms on the bottom level of the house boat and said enjoy ourselves, as we had the run of the boat being on the second level.

Well, we partied hard, told plenty of lies and laughed none stop but most of us ended up in bed by 9.00pm. Some of the men were bad boys and stayed up until 9.30pm. Too much excitement was our excuse for the early night, it had nothing to do with our age.

The next morning we had a big breakfast and headed off on the fishing boat to watch the sunrise. Our last tour of the trip was going through the Falls while the tide was dead still.

What a complete change as we headed through both falls with no movement. We headed back to the main base ready for our flight back to Derby. We took our private helicopter flight back while the others headed off on the seaplane.

It was an adventure everyone thoroughly enjoyed and well worth the money. Everything ran like clockwork and the staff are fantastic.

We spent a few days in Derby and the sunsets were spectacular and every night they were different. The group explored the area and having a Woolies in town we could replenish our supplies. 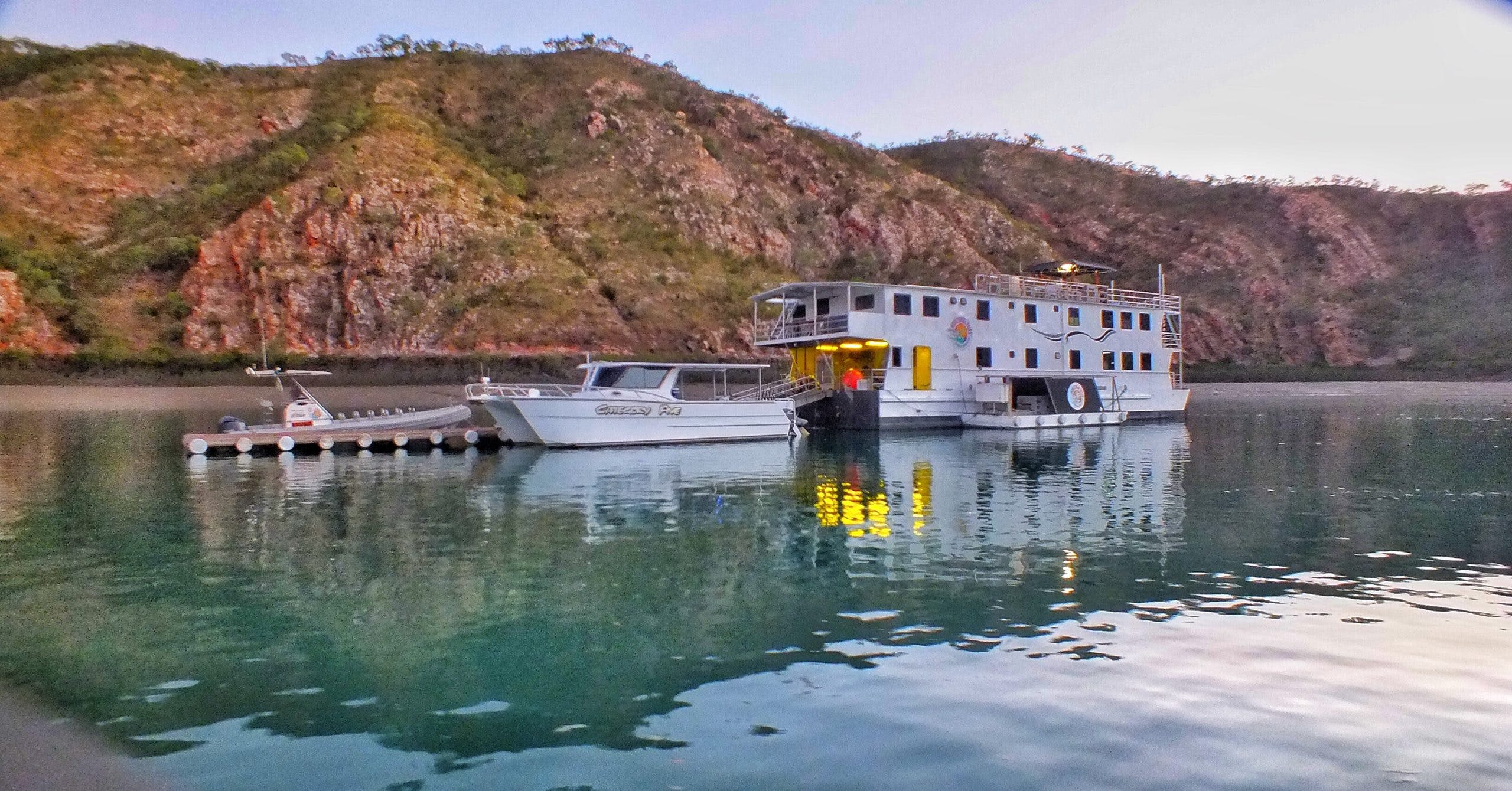 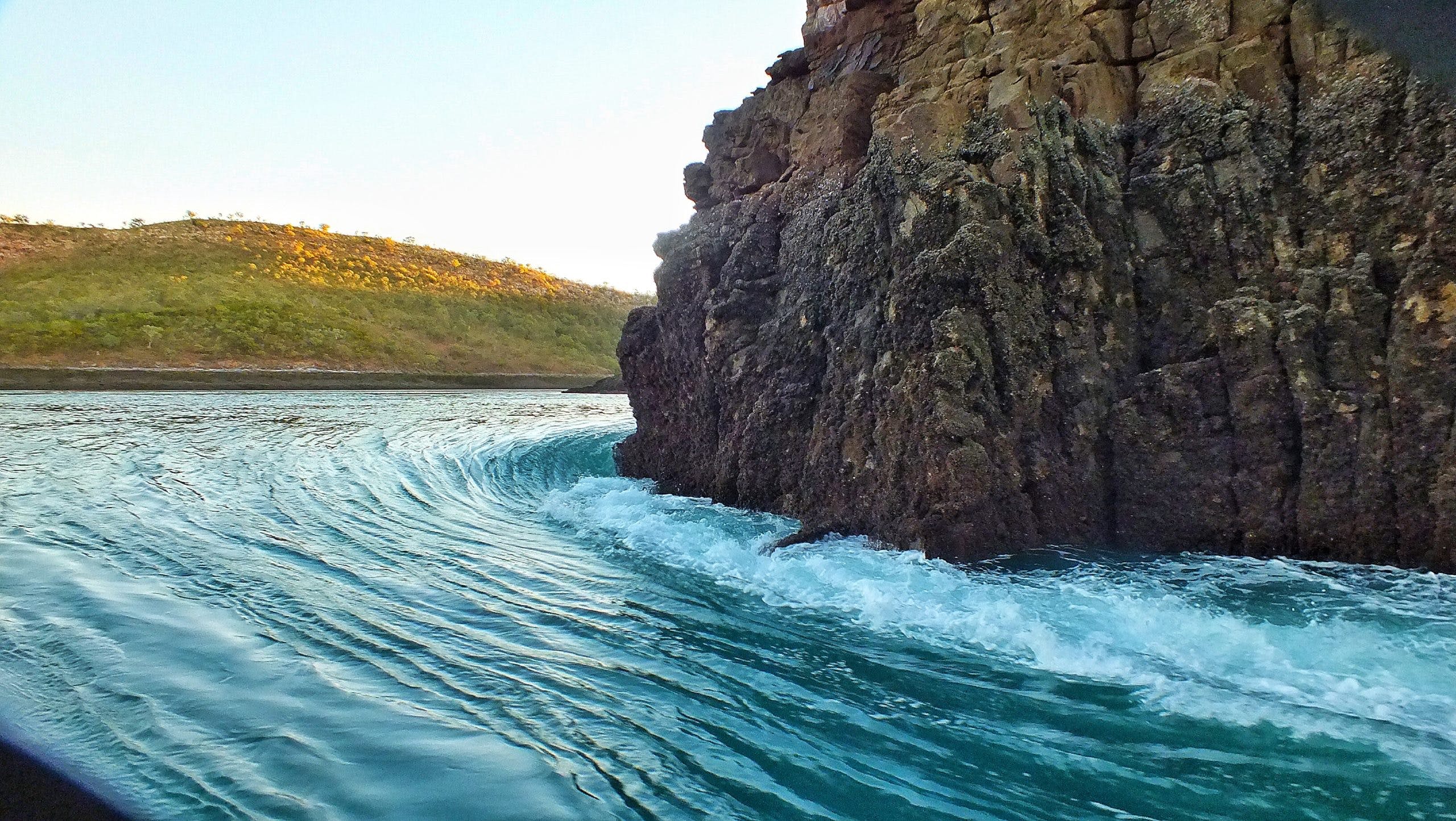 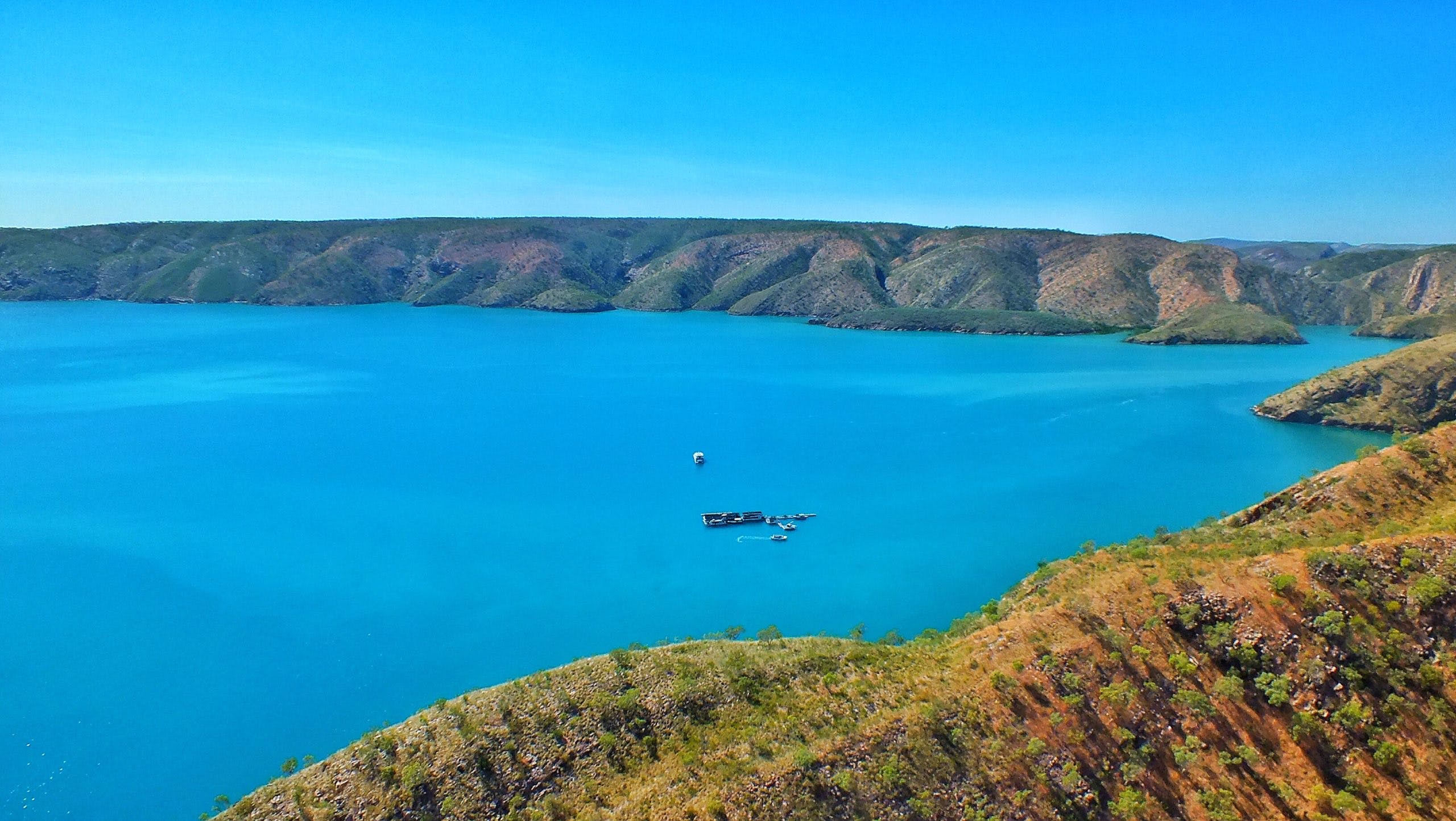 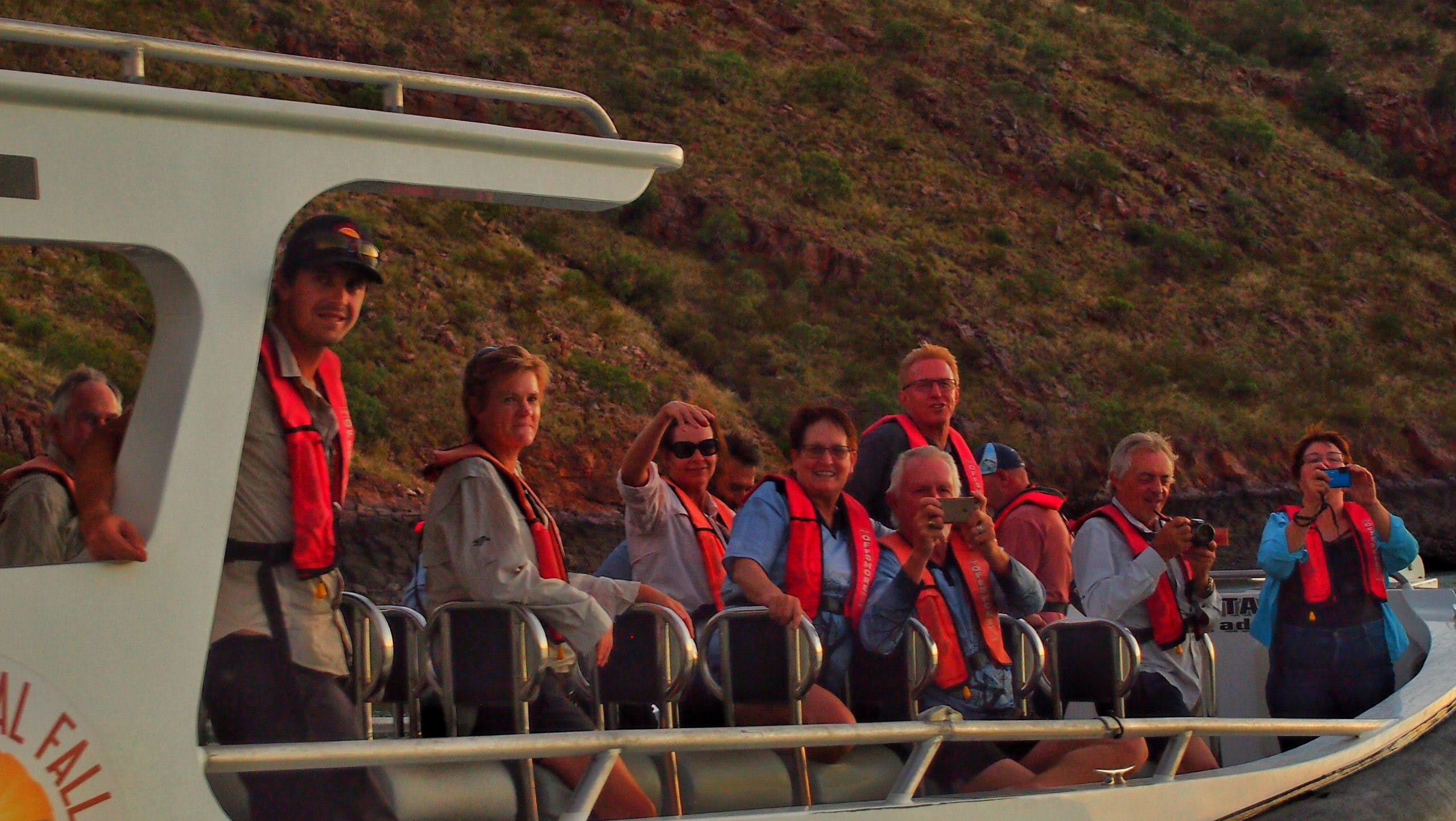 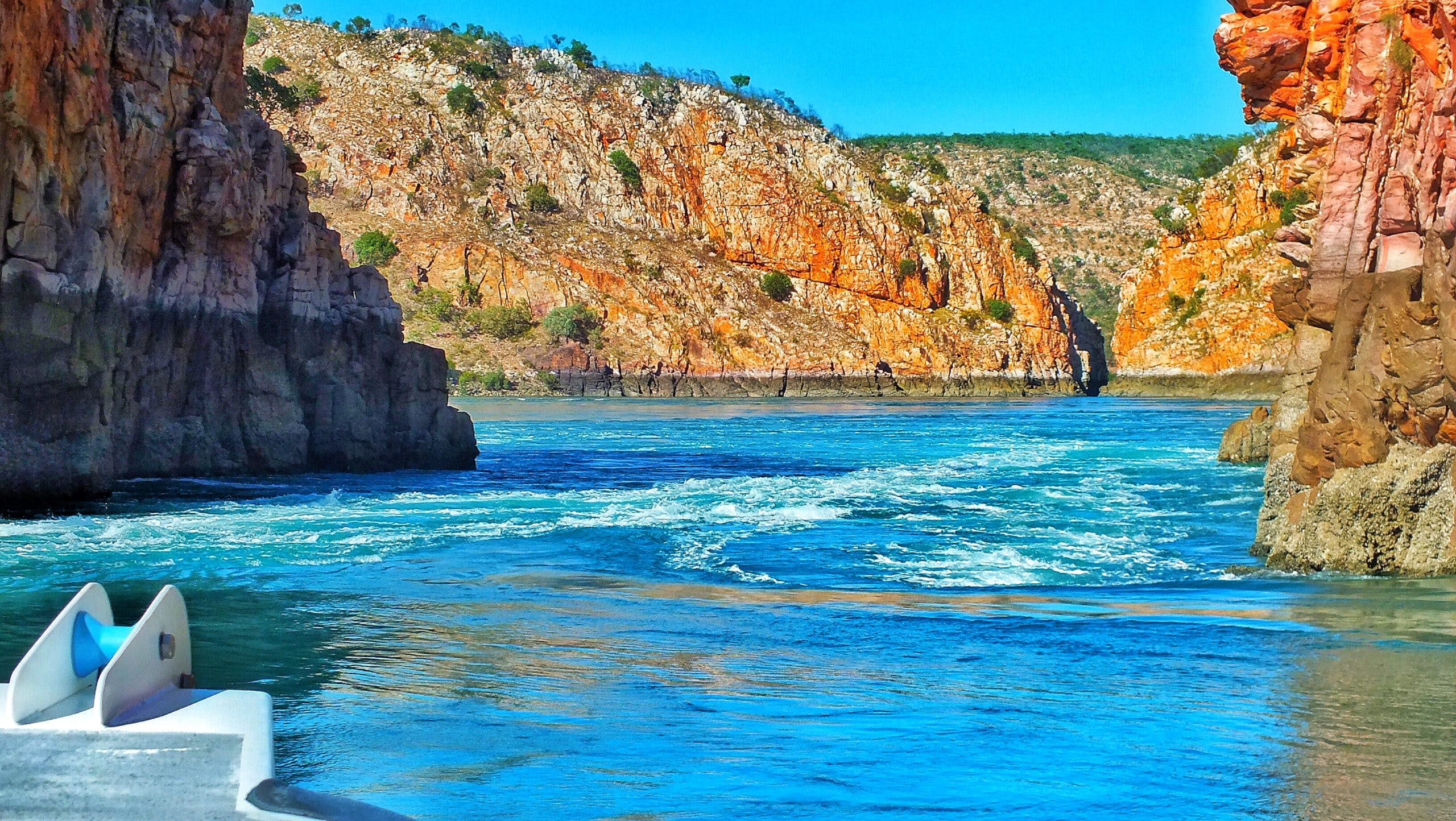 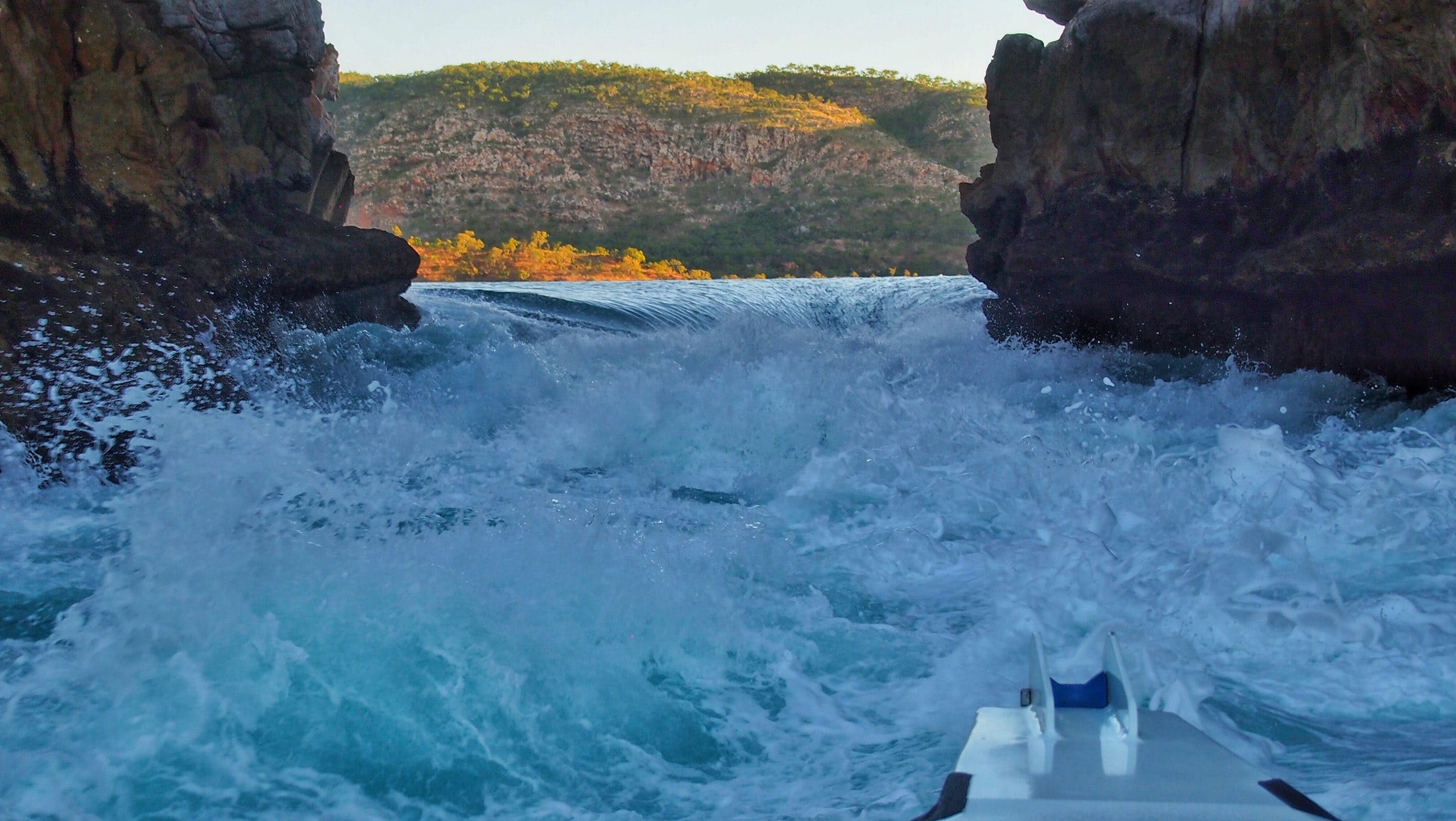 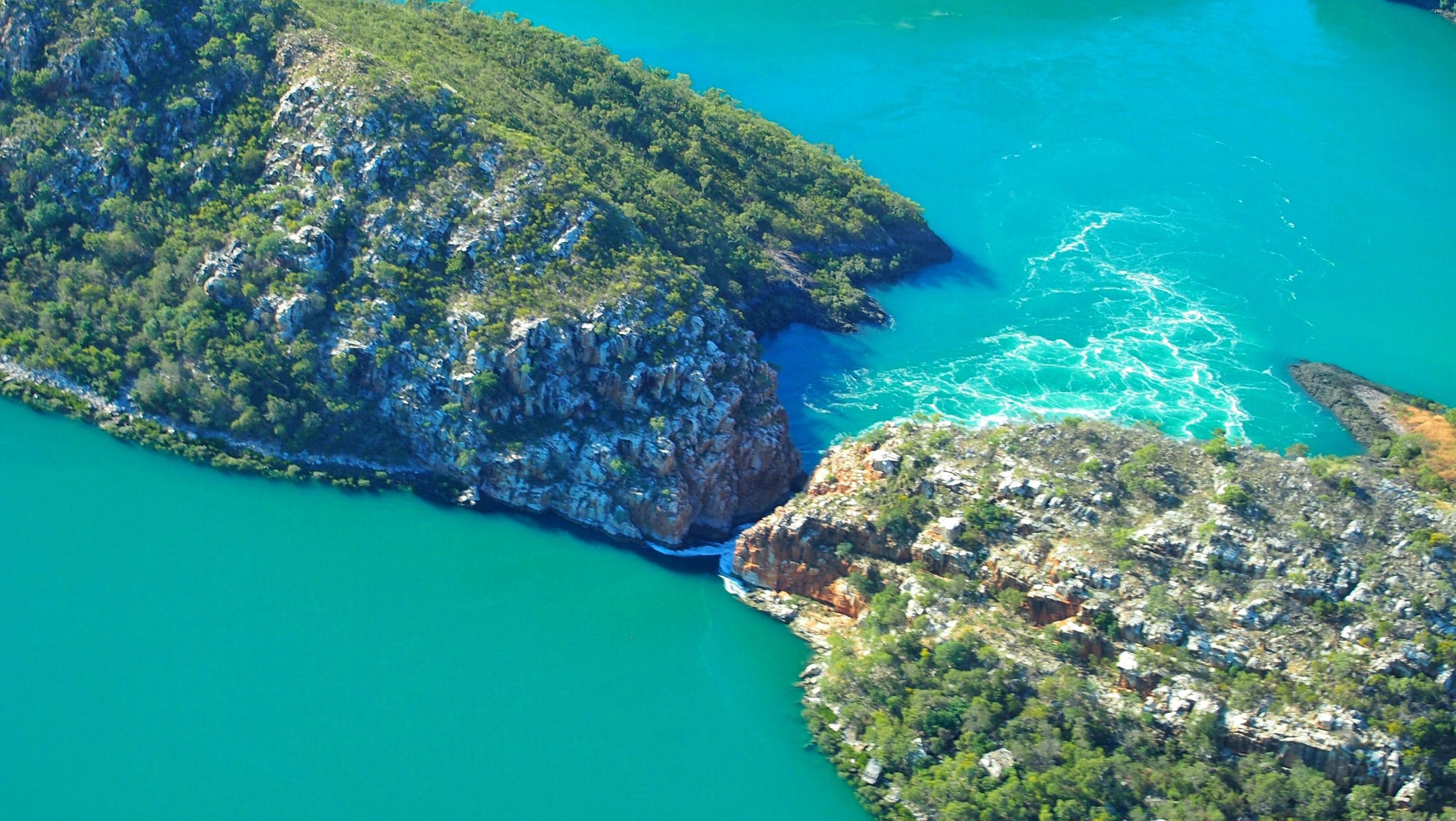 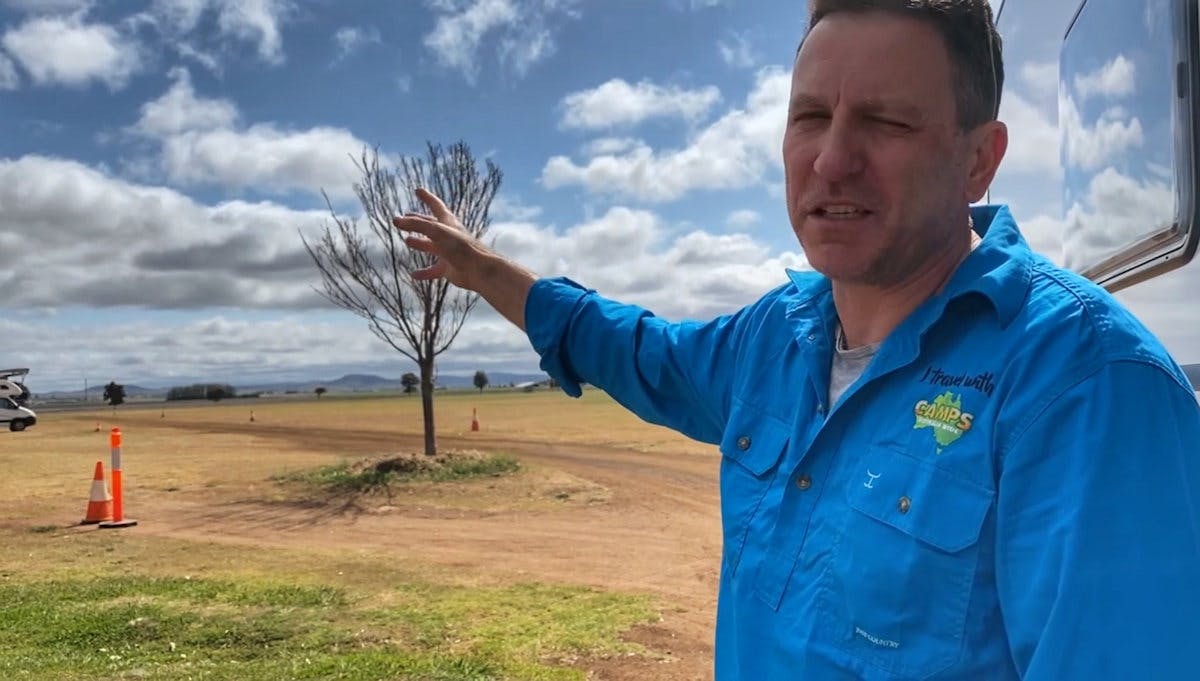 Fuel your travel with 25 favourite free camps and more 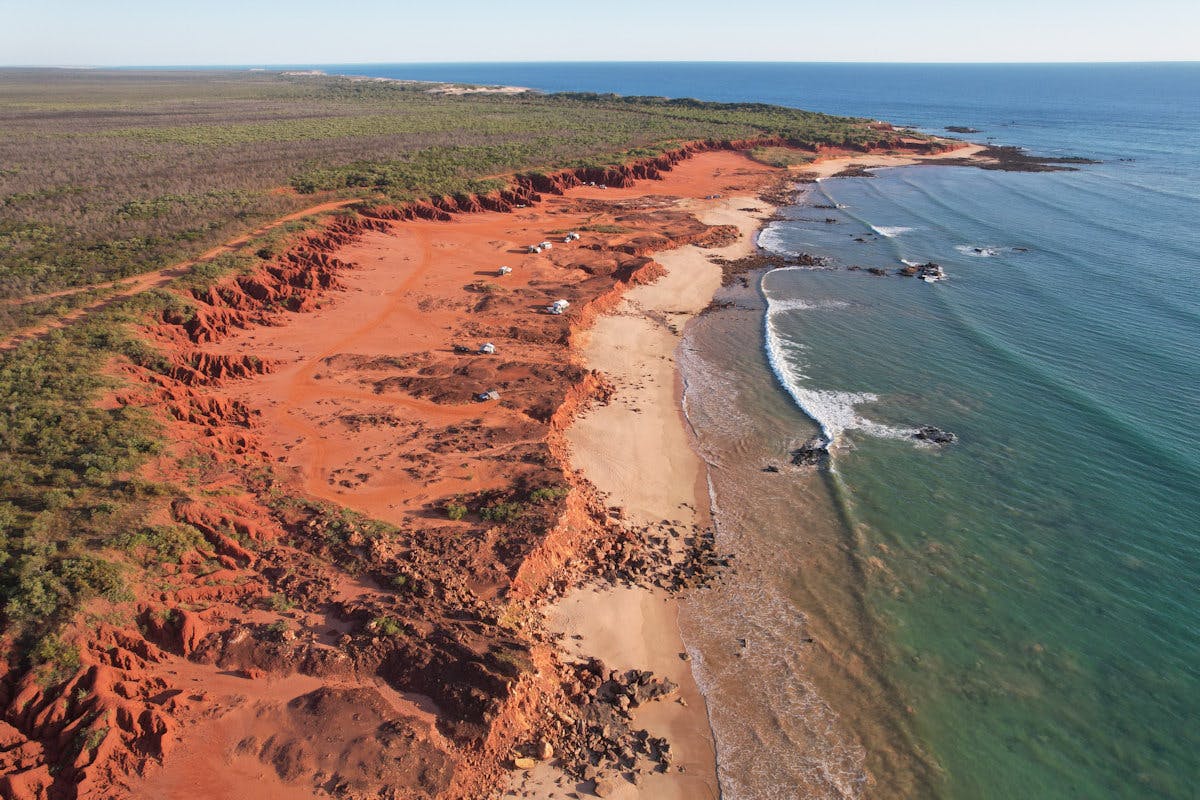 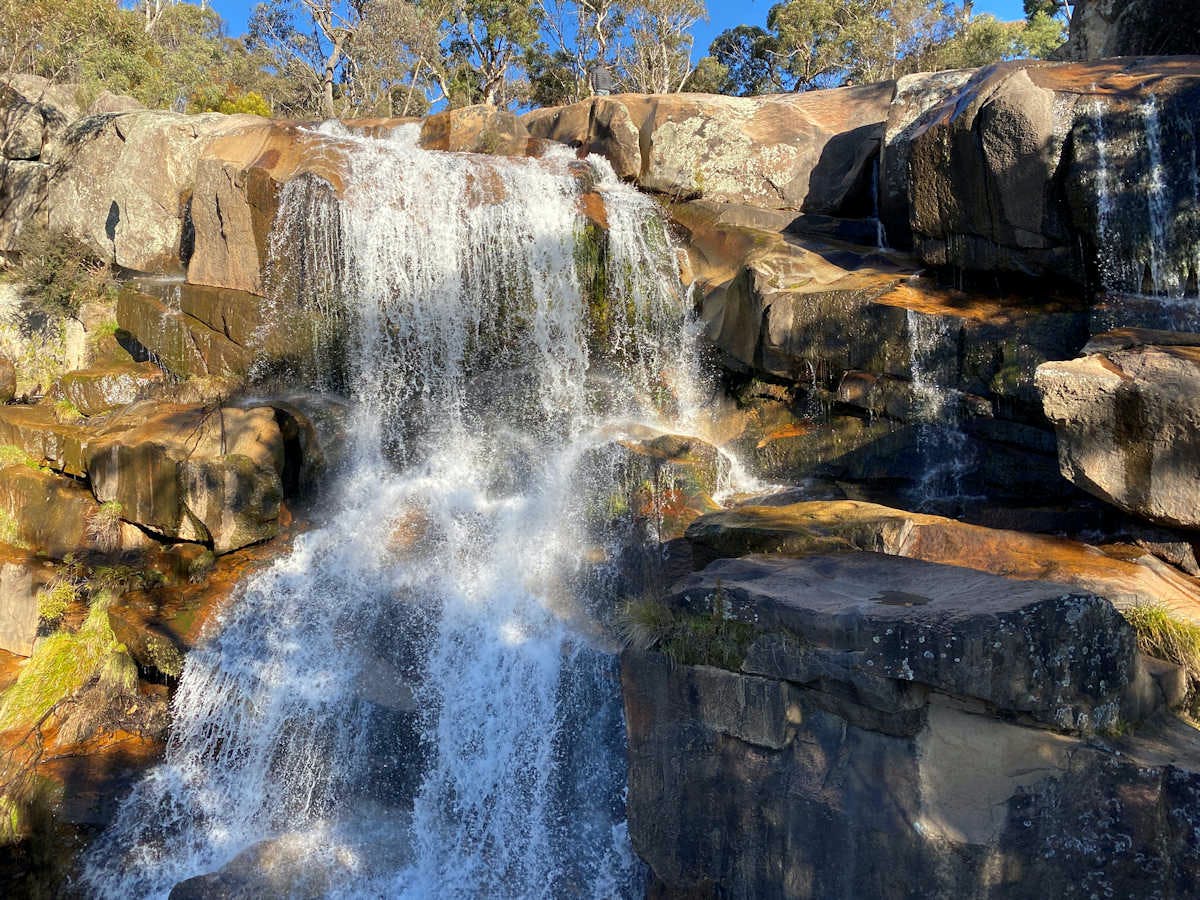 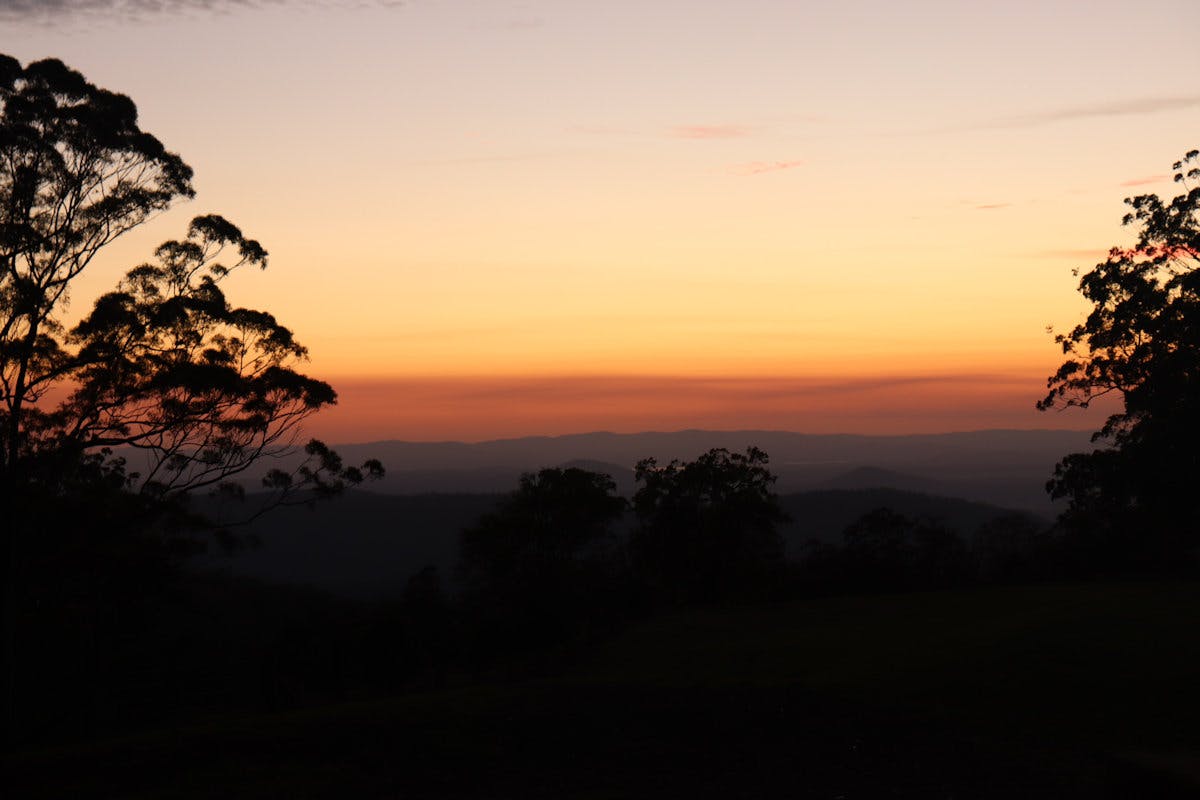